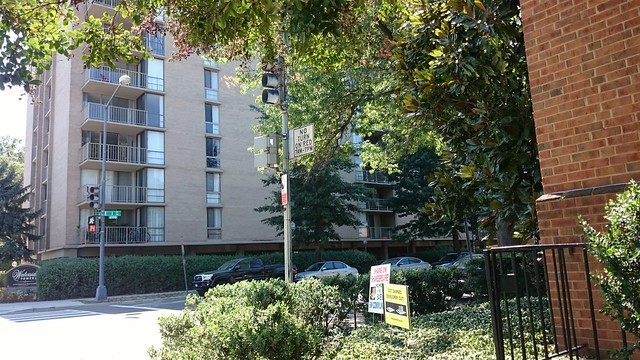 Already in my front yard, but my side yard? The world will END!

This language marginalizes and dehumanizes the majority of Southwesters, who already live in high-rises and so apparently don’t count as “the SW community.” (They’re hardly the only rowhouse residents in DC who think apartment-dwellers are subhuman scum undeserving of equal rights.) And since we high-rise residents don’t have land-wasting, water-sucking yards, we can’t litter the streets with dead-tree petitions that list our grievances.

I read and re-read the City Paper’s cover story about the former Southeastern University building, looking for even a glancing mention that the “multi-story building” proposed is surrounded not only by “dozens of two- to three-story townhouses” but also by several other multi-story buildings — including Waterside Towers, just across the corner, which dozens of the townhouses already abut. But no, the writer took the side of the “underdog” homeowners, sitting pretty in their $700K-$1.2 million homes, and who only want to be surrounded by other million-dollar houses.*

The NIMBYs can whine all they want about “contextual disharmony,” but towers + townhouses is exactly the urban pattern that defined Urban Renewal Southwest from the moment ground was broken on Capitol Park. The neighborhood’s own original architects**, whose original vision is worshiped at several local temples by the preservation crowd, called it “an interlocking pattern of high apartment buildings and town houses.” In a neighborhood where high-rise residents make up the vast majority of the 10,000 local residents, 300 signatures means little. Indeed, 300 signatures are outweighed by the 300+ residents and employees who will live and work in the proposed apartment building — a number far fewer than the 2,000+ students, faculty, and staff who were at SEU in its heyday.

Others will argue about the sanctity of the zoning and the comprehensive plan — but those documents were politically defined, not monuments to sound planning; they merely enshrine existing conditions and a “do-nothing” approach. When the Office of Planning zoned Southwest in 1992 (OZ case 92-7) after the old NCRC (urban renewal authority) was disbanded, everything was zoned for precisely what existed at the time. I can walk down the hall from my apartment and through three different zoning districts, all without going outside. If my building burned to the ground, it could only be rebuilt in exactly the same shape that was planned in the 1960s; even something that rearranged the same density differently on the site would be illegal. Thus, any change to the built environment in Southwest necessarily requires a zoning change, and that’s been true of almost all of the new developments being built.

Zoning only specifies an upper boundary to density, dating back to its origins as a legal tool that 1920s economic elites could use to enforce their own anti-“parasite,” racist, classist aesthetic tastes. Thus, only “overdevelopment” gets a legal definition and police-power enforcement tools, whereas the equally subjectively defined (but just as pernicious) “underdevelopment” isn’t a matter worthy of government interference.

The comprehensive plan, as I’ve hinted at, includes a fundamental contradiction: Its text begrudgingly admits that great change must come to the city, but its map bravely assures an anxious public that almost nothing will change across almost all of the city. Like most climate-change plans, the contradictory Comprehensive Plan sets lofty goals — the easy part — but doesn’t quite follow through. It’s like a diet book that tells readers that cutting calories is great in the abstract, while also assuring readers that they don’t have to change a thing about their current diet of cheeseburgers and chocolate cake.

The Southwest small area plan was meant to raise the idea of updating the zoning and facilitating more development, but as usual any attempt at defining a long-range vision was subsumed by short-term reactionary opponents of this specific project. Eric Shaw’s insinuation in the CityPaper that there was unanimity around this site is false; I know that I specifically added comments in support of rezoning this site, and about generally accommodating new development on select sites.

Other long-standing institutions in the neighborhood — specifically, Greenleaf Gardens, the mainline Protestant churches, and the government facilities in the “auto service center” around the DMV and post office — all got spot upzones through the small area plan. Their sites were redesignated as “medium density” rather than “moderate density,” in order to facilitate the eventual sale of their air rights through redevelopment. Ironically, SEU’s inability to secure an identical upzoning happened not on the merits — it’s much closer to transit and to everyday retail than the “auto service center,” and the church across the street got a density bump — but probably because it didn’t last long enough as an institution to argue its case before OP.

Yes, it’s silly that the developer bought the property banking on a zoning change; that’s not a strategy I would have put money behind, and not one that would work almost anywhere in Northwest. But developers do it all the time, since both zoning and the comp plan are more closely related to NIMBY objectives (read: the world is perfect as-is and shouldn’t change, so everyone hold their breath!) than to actual planning goals. 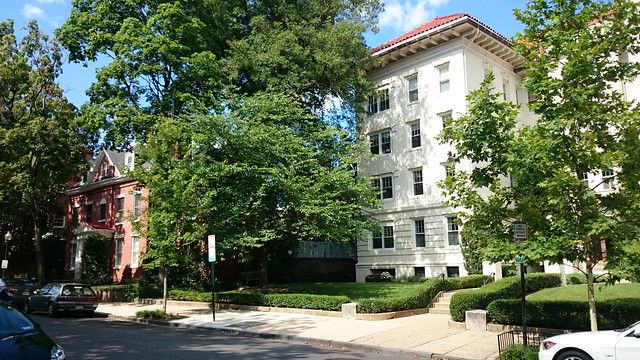 Apartments have been staring down upon Tudor Place, one of the most elegant estates in Georgetown, for almost a century — yet the world still goes on.

* Not to mention that nobody at all stood up for plans to build million-dollar houses at two sites in Southwest where they would have had negligible impact on neighbors: the Wharf’s Pier 4 (mentioned here; they actually would have reduced noise and traffic, relative to the cruise ships) and at the Portals.

Which reminds me of another pet peeve: The Fifth Amendment does not guarantee any Constitutional right to forever-appreciating property values. If there was one, there would definitely be a “disparate impact” claim to be made.

One thought on “Full of sound and fury, Signifying nothing.”