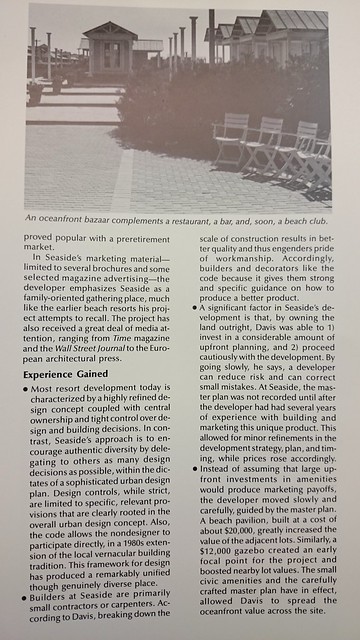 The ULI office is moving in a few months, so a lot of old files are being tossed out. One that I saw poking out of a garbage can was a 1986 Project Reference File written about Seaside, Florida. The “lessons learned” section worth excerpting, if only because it doesn’t talk about the PoMo architecture, or even the planning — instead, it’s all about the incremental nature of the development.

Most resort development today is characterized by a highly refined design concept coupled with central ownership and tight control over design and building decisions. In contrast, Seaside’s approach is to encourage authentic diversity by delegating to others as many design decisions as possible, within the dictates of a sophisticated urban design plan….

A significant factor in Seaside’s development is that, by owning the land outright, Davis was able to 1) invest in a considerable amount of upfront planning, and 2) proceed cautiously with the development. By going slowly, he says, a developer can reduce risk and can correct small mistakes. At Seaside, the master plan was not recorded until after the developer had had several years of experience with building and marketing this unique product. This allowed for minor refinements in the development strategy, plan, and timing, while prices rose accordingly….

Instead of assuming that large upfront investments in amenities would produce marketing payoffs, the developer moved slowly and carefully, guided by the master plan.

In short, plan far ahead, regulate what matters, and phase to allow adaptation and evolution. (Evolution, not revolution.) Alas, the world still has a lot to learn from Seaside.

This point is echoed by Peter Cookson Smith in a book that I’m reading about Hong Kong, a seemingly very different place:

Overly engineered environments leave little flexibility to make incremental adjustments in response to the evolving economic circumstances that normally represent the lifeblood of towns and cities.