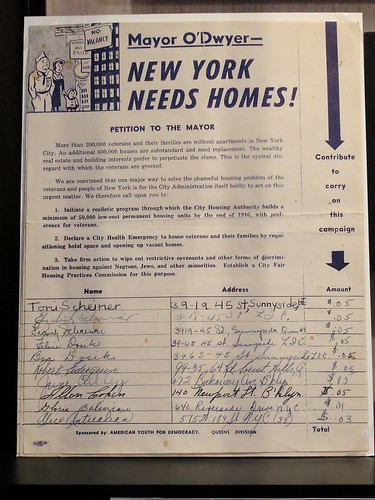 In 1946, even the Communist Party USA agreed that the obvious solution to a housing shortage was to build housing. Why is that controversial now?

In a recent fit of contrarian cutesiness (which I partly responded to earlier, here), Chuck Marohn wrote about out-of-control housing prices: “The simple answer is downzoning.”

That’s as dishonest an answer to the question as Tommy Lasorda, in those vintage Ultra Slim Fast commercials, saying that the secret to out-of-control weight is spaghetti-and-meatball dinners — the daily treat, rather than the three calorie-restricted, high-fiber shakes that you choke down the rest of the day.

Marohn balances his call for downzoning with a casual mention of his previous “floating height limit” idea — allowing, across all zones, somewhat bigger buildings than the norm. This would, in essence, upzone the vast majority of metropolitan American land that’s currently zoned solely for low-rise single-family residential, while lowering allowable heights in the much smaller proportion that’s subject to more-lenient commercial zoning. (Of course, in his contrarian telling, a call for raising allowable building heights for 90% of America is titled “the case for height restrictions.”)

He pins the blame for metro Portland’s housing affordability crisis — and, by extension, the broader housing-affordability crisis afflicting bicoastal Blue America — on property speculation, saying that developers are bidding up residential land prices around transit in hopes of winning rezoning to build multifamily TOD. Thus, his call for downzoning, to frighten off those vile speculators. There certainly exist a few situations where transit-oriented speculation distorts markets — I’ve written about these pretty extensively in GGWash, pointing to why “parking craters” surround Metro stations instead of 8-story high-rises.

But these are fringe situations, affecting only a few square miles across the entire country. Even when I lived in the highly desirable, transit-accessible neighborhood of Bucktown, where zoning was infamously corrupt, the upzones that the local alderman brazenly sold did not result in the dumpy single family houses being replaced with parking-light apartments, as Chuck’s hypothesis holds. In fact, the exact opposite occurred: dumpy, parking-light apartments were replaced with swanky single-family houses! In countless other areas which have been downzoned, housing prices have increased regardless of speculation.

Why? Because the price increases in Bucktown, and on Portland’s east side or Los Angeles’ west side, have little to do with transportation (Chuck’s bailiwick) — and much more to do with rising income and wealth inequality, both within and between regions, combined with a largely static land-regulation regime that hasn’t adapted. The gains accruing to the wealthiest means that the wealthy can bid up housing prices, substantially raising housing prices in high-income regions where both demand and barriers to entry are high. As I wrote earlier, this imbalance has held on for decades in some cities, particularly in coastal California, and the political dynamic that sustains it appears to be utterly implacable.

As I also wrote earlier, the economies in different regions have diverged in a way that has fed this dynamic. Economists Stijn Van Nieuwerburgh and Pierre-Olivier Weill found that “house price dispersion” between regions increased much faster than income inequality between regions (which has also been increasing): their statistical measure of the variation in house prices increased by 38 percentage points, vs. 8.6 points for wages, from 1975-2007. As their paper explains,

The situation has gotten even worse since the 2007 crisis, with housing prices in wealthy Census tracts increasing almost twice as fast as those in more modest areas.

Just to be sure, the Harvard Joint Center on Housing Studies examined metro-level data about the uneven recovery in house prices more closely and observed:

Sure, pointing the finger at transit, multifamily, and TOD burnishes Chuck’s prickly-independent bona fides, a long tradition in Upper Midwest politics. But he’s searching only within his narrow sphere of expertise (transportation) to find the cause of problems that have much larger global causes — and which don’t lend themselves to his hyper-local bootstraps approach.

Update: Portlanders have already studied and diagnosed their problem — as in Bucktown, it’s inequality and McMansions, not multifamily zoning. Their solution is not downzoning, but rather to switch up the zoning in lower-density neighborhoods, increasing the number of units allowed while reducing FAR allowed.